In the 12th and 13th centuries, Galston was an important ecclesiastical centre and the influence of this can be seen in several local names.
The name Galston means the `place of the strangers` from the Gaelic word gall (a Stranger), and the Anglian word tun (a hamlet or enclosure).
The Burnawn River, originally named the Burn of Anne after Saint Anne the mother of the Virgin Mary, forms the eastern boundary of Balmoral Mill. A bridge was first built in 1640 to give access to houses on the east side of the river where Balmoral Mill shop is now situated.

Further evidence of the great antiquity of Galston is found in the career of Sir William Wallace who achieved ‘an early victory in 1296 at Loudoun Hill after passing through Galston’.

The burgh coat-of-arms, which in one quarter has a heart clasped by a mailed fist, commemorates the fact that it was Sir William Keith of Galston who brought King Robert the Bruce’s heart back to Scotland to inspire Scots in future battles.

In 1811, when Galston was a small agricultural centre, it was described as one of the handsomest villages in Ayrshire. Its exact origins are lost in the distant past but it has the distinction of being the oldest surviving settlement in the Upper Irvine Valley.

Polwarth Street
Polwarth Street is named after the Earl of Marchmont, Lord Polwarth and his ownership of Cessnock Estate, on the outskirts of Galston.

Balmoral Mill Shop is situated on Polwarth Street, on the far left in the photograph just before the ‘Muckle Brig’!
The Textile Trade’s Influence on the Population of Galston
The early years of the 19th century witnessed a rapid rise in the population of Galston. In 1811 there were 905 inhabitants and by 1818 the figure had increased to 1351. The explanation lay in the huge expansion of the textile trades, with the handloom weavers being the backbone of the working class.

The mining industry was also developing. The two different types of employment complemented each other, with the men ‘going down the pits’, and the women working in the textile factories.

By the end of the 19th century, other textile manufacturers added to the prosperity of the town. In addition to a number of stocking makers there were four lint mills producing linen yarn for the weavers. There were two lace and madras factories and these competed with the numerous lace firms in the other Valley towns.

The only trade that was in decline was white needlework. In 1791, 24 women had been employed, with this number increasing over the next half of the century. The simple designs were developed into intricate lace insertions in cut muslin. Women worked through the day but often had to share a lamp in the evening in order to make good wages. By 1856 the fashion had changed and handsewers had been reduced to a few. 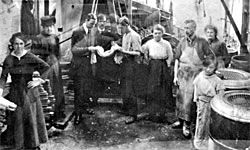 Sharp’s
Apart from the blanket mill, the only survivors of the traditional textile trades of the town were the hosieries, the descendants of the stocking makers. As with Sharp’s, these businesses often developed into knitwear factories capable of a wide variety of knitted goods. Sharp’s changed its name to Balmoral Knitwear (Scotland) Ltd in 1991. The photograph shows the scouring department at Sharp’s in 1895.

The History of Balmoral Knitwear – Early Days
There has been a knitwear business on this site on the banks of the rivers Irvine and Burnawn in Galston since at least 1895. Details of its initiation are not clear, but, as with the whole of the Irvine Valley, it will have been set up to take advantage of the favourable environment, plentiful supply of soft water, and ready local supply of employable women whose husbands worked in Ayrshire’s coalmines.

The known history can be traced back to 1911, to William Sharp who was the founder of the business. He took over the site and together with the financial support of 5 Glasgow lawyers and wholesalers set up a company called William Sharp (Galston) Ltd. The company with its 50 or so staff knitted spun woollen yarn into coarse gauge ‘wheeling pants’, which were traditional men’s undergarments and socks. The Great Grandfather, Thomas Mackie, of our current Managing Director Jamie,  became a director and his son James Wylie Mackie moved over from Mackie’s of Stewarton to run the business in Galston.

In the 1930’s, as the methods of heating improved, fashions changed and the demand decreased for the very heavy knitted garments that William Sharp produced. The items manufactured in the factory changed accordingly and concentrated on knitted suits and dresses, made from 100% wool, produced on 60 ‘handflat machines’.

View from the North East
The Parish Church in the 1890’s, sits on its elevated position in the middle of the town, overlooking the roofs of the old town. The photograph was taken from the northern end of the Muckle Brig and shows the Burnawn flowing into the river Irvine at the left hand corner. The two old thatched houses on the south bank are long gone and are now replaced by the houses on Church Lane and Balmoral Knitwear’s factory, and Mill Shop.

The History of Balmoral Knitwear – War Time and Post War
During the Second World War, the factory was virtually closed for the concentration of industry. A skeleton staff was kept on to maintain the factory and the rest of the staff and machines were transferred to Irvine to the Strathclyde Knitwear factory.

After the War, the factory re-opened with its utility staff of 6. The government controlled garments that were produced, and specified the yarn, knit and prices. Times were hard! This was compounded by the fact that there was full employment so there was a serious shortage of skilled labour.

In the 1950’s, the factory’s production range expanded to included ladies twin sets and cardigans, as well as continuing to make specially ordered knitted suits. With electricity becoming the main source of power, the factory produced its own electricity from a gas engine. This enabled the use of powered knitting machines, the power being fed to the machines by means of overhead shafts.

Gents knitwear was introduced in the 1960’s, consisting of cardigans, traditional jumpers, slipovers and sleeveless cardigans. These were made in ribbed style using a range of yarns. Scarves, bonnets, and children’s garments were also made.

A Riverside Walk
At the eastern end of Galston, upstream from the bridge where Balmoral Mill Shop is situated, was an attractive corner of the town. A pathway with summer seats flanked the river, with gardens of Polwarth Street and Barmill Road stretching back to the old mill at Kilknowe.

Sharp’s Staff Photograph
This photograph shows the staff of William Sharp. It was taken in 1910 outside, what was then, the front of the factory. Mr Sharp himself is seen on the far left of the picture. The front facia of the building was changed in 1991, when the building was extended forward to Church Lane. The large door that the group is standing in front of is now the start of the factory floor, with a new trade entrance, staff canteen and offices being added in the additional space. 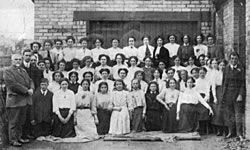 The History of Balmoral Knitwear – The Present Day
The trading name was changed from William Sharp (Galston) Ltd to Balmoral Knitwear (Scotland) Ltd on 29 May 1991, to give the business a more modern feel and better reflect the nature of its business. The name has been used as a brand name for 50 years.

In 1993, Balmoral Knitwear was awarded BS EN ISO 9002, which is a Quality Assurance Award, showing the company’s commitment to high quality standards.

Balmoral Knitwear used to manufacture classic garments for ladies, gents and children. The company offered an extensive and in-depth stock range as well as the capacity to manufacture to customers own specifications. The embroidery service added patterns or logos onto garments. A variety of different yarn qualities were used. These include super acrylic, 50% wool and 50% acrylic, 80% wool and 20% nylon as well as 100% luxurious lambswool, which gave the Balmoral product a variety of textures and handles for different types of customers and markets.

The styles of knitwear have changed over the years, but the concept of well made, hard wearing classic garments has and continues to be the basis of the business.

Ian Mackie, ran the business from the 1960’s and the current MD, Jamie’s son Gavin also worked in the business making 5 generations of the Mackie family who have worked for Balmoral Knitwear, quite a rarity. 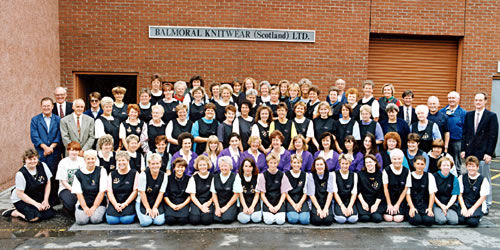 When it was still manufacturing, Balmoral Knitwear employed 65 people and was the largest employer in the town.
Balmoral had many members of staff with long service records, the total number of years service for all our employees came to 975 years, an average of over 15 years per person!

Balmoral Knitwear unfortunately ceased manufacturing in Scotland in 2018 after 122 years. The business continued trading under the name Balmoral Mill Shop Ltd which was previously the retail division of the business. It continues to supply core products using the same proven partner factories that have been used for many years. All the products can still be supplied plain or embroidered.  The Mackie family still work in the business offering continuity and committment.

The History of Balmoral Knitwear – The Mill Shop
The origins of the Mill Shop at Balmoral Knitwear started in a small shop in the corner of the factory, where prospective customers were taken to be fitted for made-to-measure clothing in the 1950’s. The shop also sold seconds.

The existing shop building was originally  Brown’s Institute building. Mrs Brown of Lanfine Estate had provided ‘Institutes’ in Hurlford, Galston, Newmilns and Darvel, the Galston Institute dating back to 1865. The Institutes were recreational centres for local people with reading rooms and snooker rooms.

The first shop in the Institute building was small and existed in what is now the Coffee Shop. It sold mainly seconds from the factory. It moved to its current position in 1987 and now sells a wide variety of knitwear for ladies and gents and also has a children’s section.

The shop building has undergone a series of upgrading programmes in recent years, The stonework has been sandblasted, the mill shop and coffee shop have been refurbished and the car park extended.

Brown’s Institute
Brown’s Institute photographed in 1920, now Balmoral Mill Shop, stands in Polwarth Street. The ‘Institute’ was built in 1874 by Miss Martha Brown of Lanfine at a time when institutes for working men were springing up all over the country to provide facilities for education and recreation.

The Muckle Brig
The Muckle Brig looking upstream, pictured here in the 1930’s. It was built in 1839. Over the bridge from the left is JM Robertson’s lace mill, no longer in business. On the right is Brown’s Institute, now Balmoral Mill Shop. The bridge is almost 175 years old and is associated with the growth and development of the modern town.

Whereas much of Britain and Scotland’s knitwear industry has closed down over the last few decades as cheap competition increased from the Far East, Balmoral Knitwear has adapted to new markets and continued to invest in new knitting machinery and equipment, including advanced computer-controlled knitting machines and design packages.

The company has developed into one of the foremost UK knitwear manufacturers (with off-shore manufacturing options) in a range of markets – such as Corporate Uniform, Schoolwear, Sports and Teamwear as well as Retail and Promotional brands.

More development is underway into new markets and new technologies to suit changing trading conditions in Britain and the rest of the world.

This includes developments in design for retail brands and investigations into new yarns. Click the Subscribe button to follow the blog on this website and you will keep up-to-date with all the news from Balmoral Knitwear in the future.